And just like that, our sweet Harper turned 4!! Every year, we’ve let her choose if she wants to have a birthday party with friends or go on a family trip (a mini weekend getaway), and this year she chose a birthday party!! It was so fun to let her pick and choose different parts of her party and watch her excitement grow as the big day arrived. This was her first birthday party since her 1st birthday, which she doesn’t really remember, so it was a big deal! 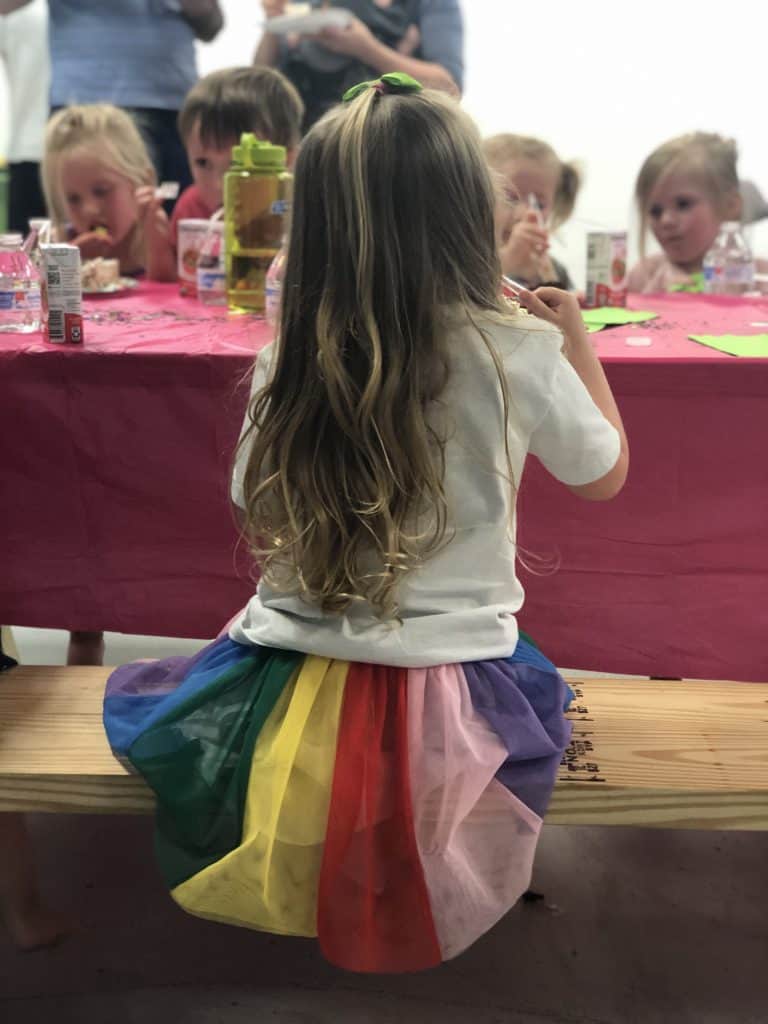 A few things I wanted to make sure of sure of this year were:

We decided on a menu with a combination of homemade and help from our favorite bakery in Charleston who bakes all our gluten free birthday cakes: WildFlour. 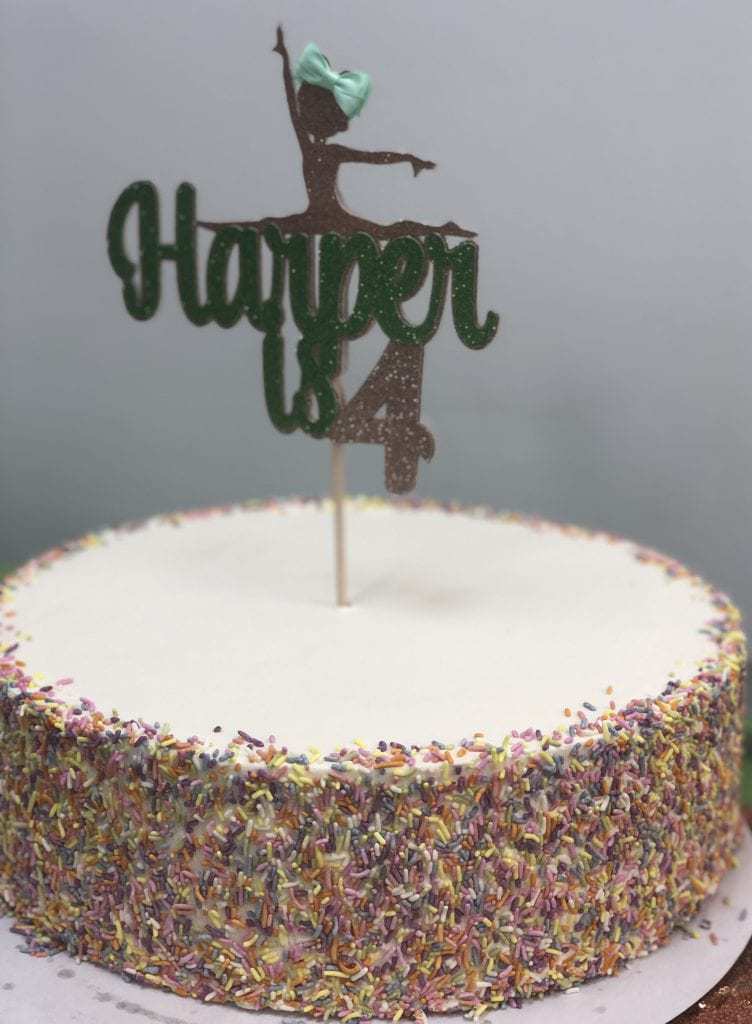 I’ve seen those sprinkle birthday cakes floating around Pinterest and knew that would be the inspo but the sprinkles the bakery provided were traditional and had artificial food dye in them, a big no for us. They were happy to use whatever we provided, so I took to Amazon and found these dye-free sprinkles in bulk. I felt slightly guilt for spending $40 on sprinkles … but these literally will last until Harper is 18. They’re not as vibrant as traditional sprinkles, but I’m totally OK with that.

We went with this simplified menu: 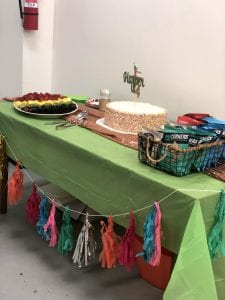 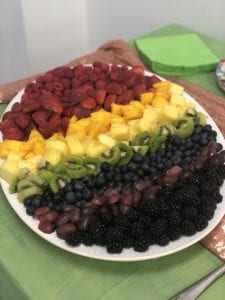 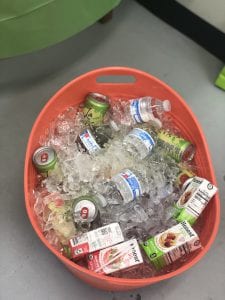 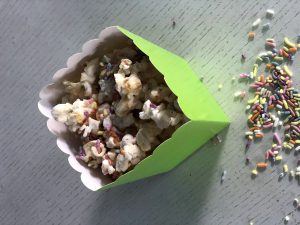 Easy peasy! And the kids and parents both had something to nibble on.

We had a heads up on how many picnic tables we would have to decorate so went with the simple table cloths, table confetti and brightly colored plates and napkins, along with simple chalkboard signs, a fun gymnastics cake topper and some rainbow paper tassels. Harper’s shown some aversion to balloons lately, or we probably would have added some additional pops of color with some rainbow bouquets, but remember: simple. 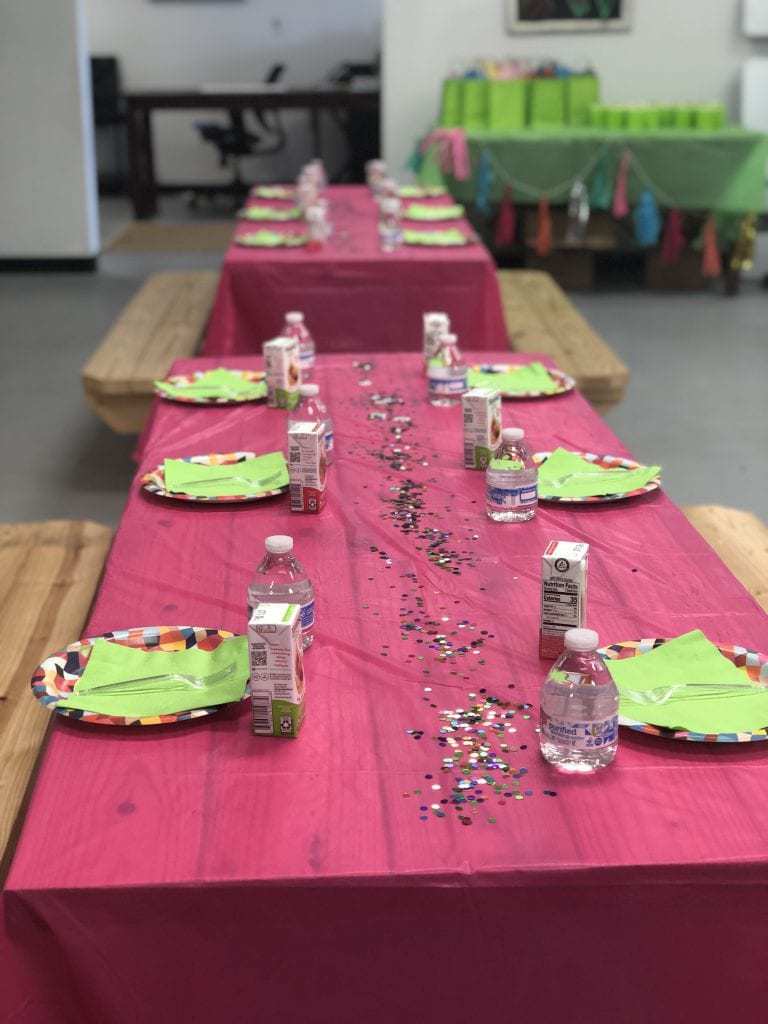 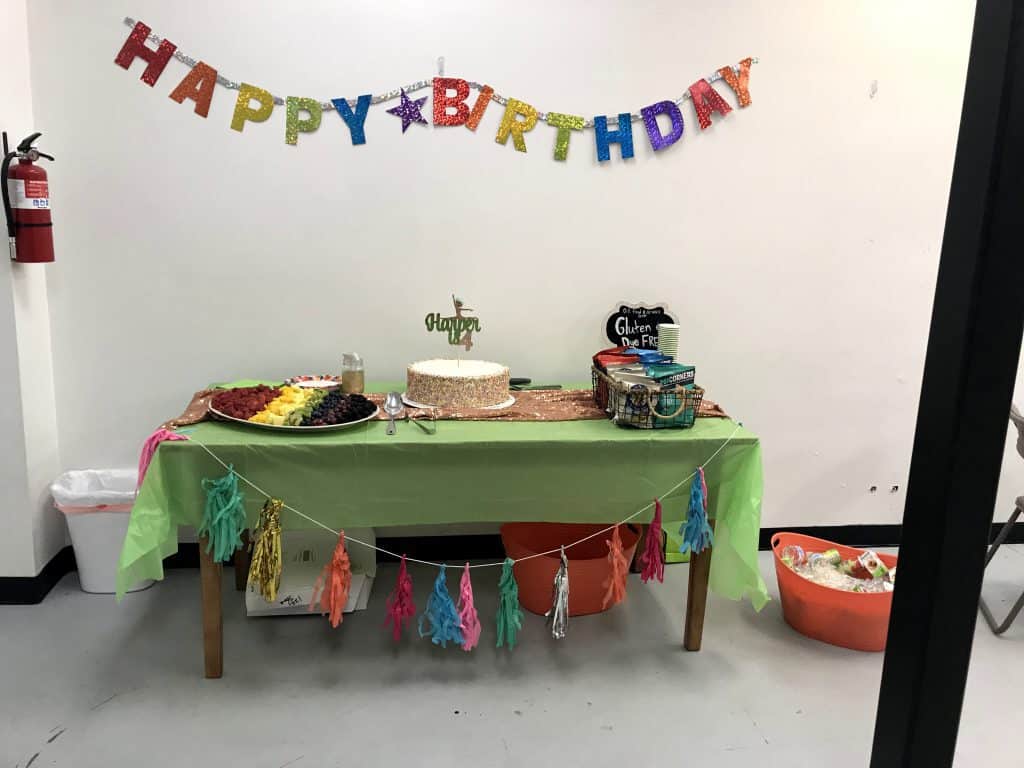 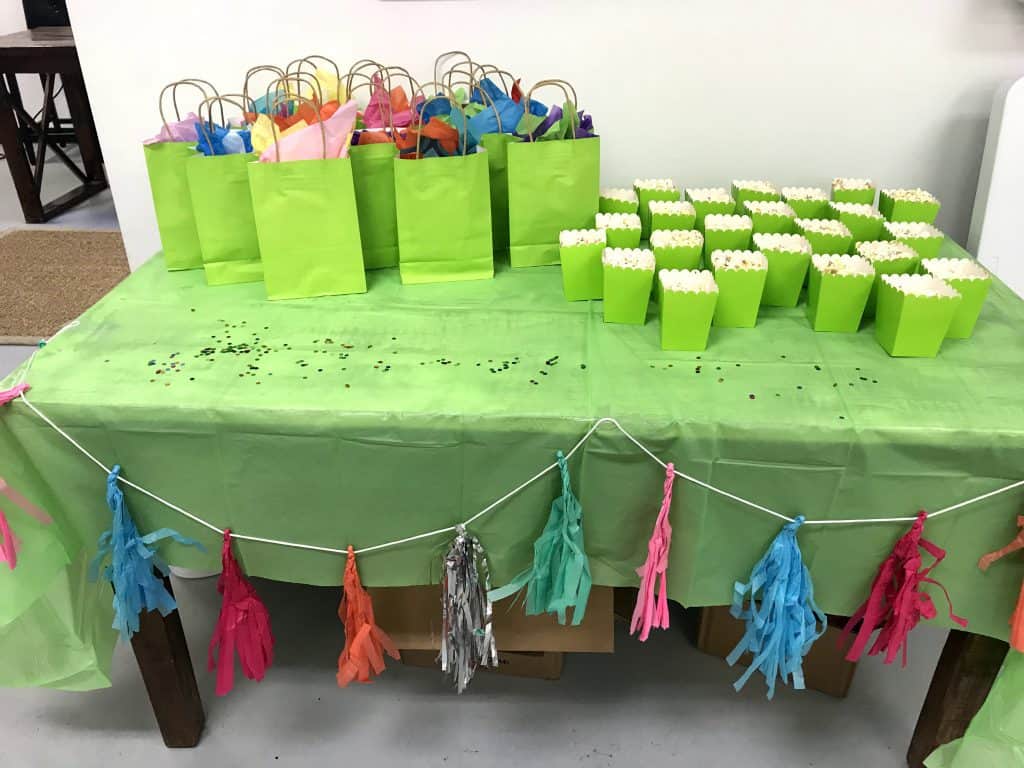 We love Grassroots Gymnastics in North Charleston for weekly gymnastics classes, so it was a natural selection when Harper wanted to have her party there. They have party packages that make it easy and include a jump castle, access to the gym and use of their party room. I didn’t have to worry about party games or what to do with a room of little ones. Yay! 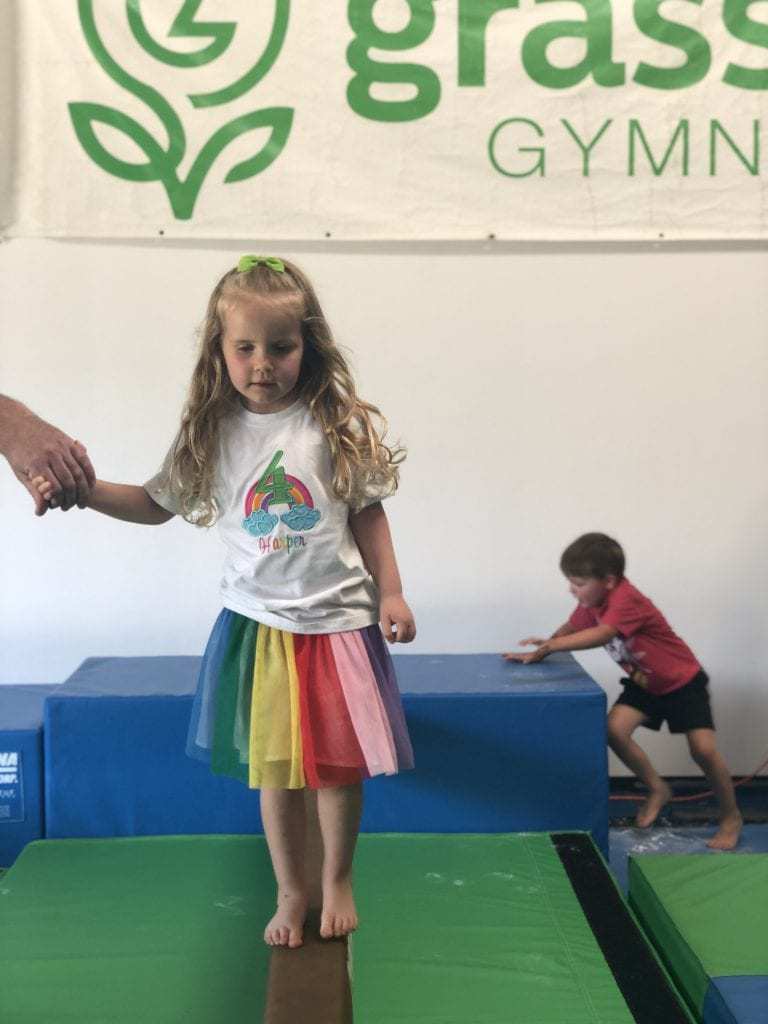 The birthday girl had to match the rainbow theme, and when I found this rainbow skirt from Hannah Anderson, Harper was so excited. She often accessorizes with tutus, and this one was so much fun! I found her tshirt inspiration off Etsy and had a local maker (Caty Did Sew) create one for us: it turned out great! 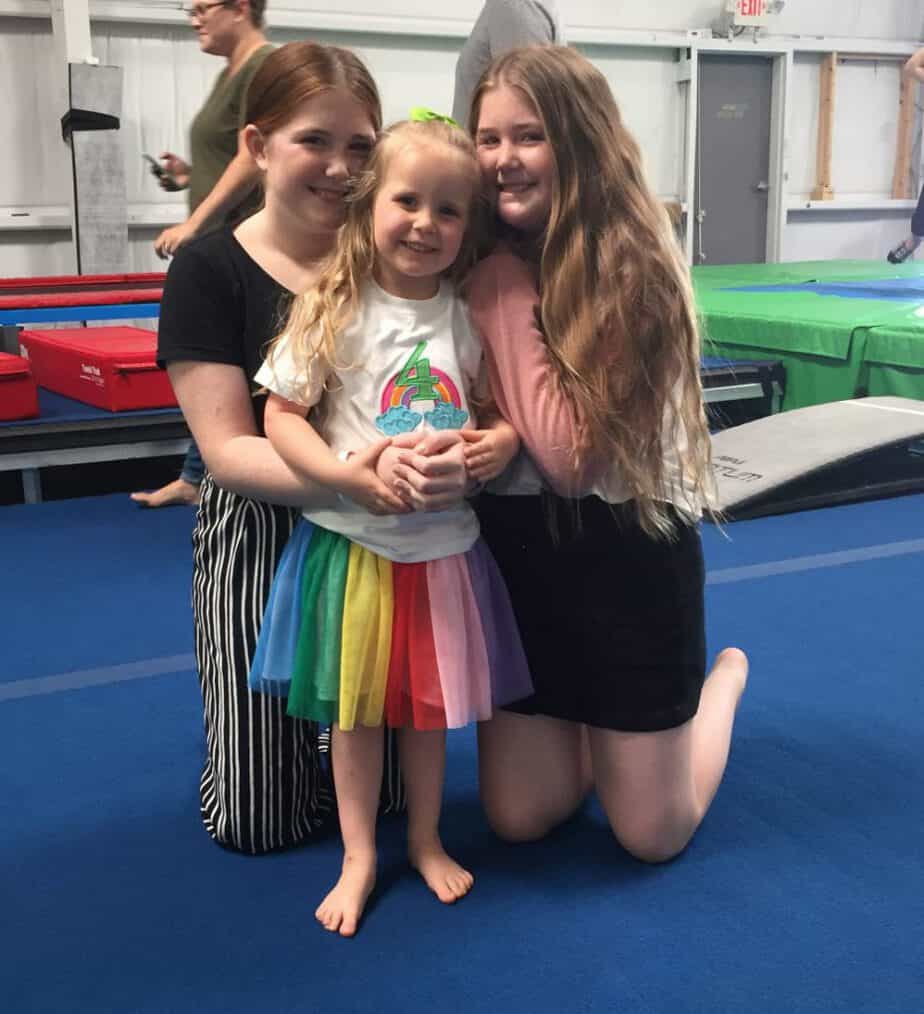 When I reminded Harper that we could give her friends all a thank you gift for coming, she shrieked in excitement!! She’s definitely one whose love language is gifts, so this was a super big deal. She settled on this sweet arrangement of her favorite things and delighted in personally not only choosing the tissue paper colors for each attendee, but also hand delivering them to everyone as the party was wrapping up. So stinkin sweet! 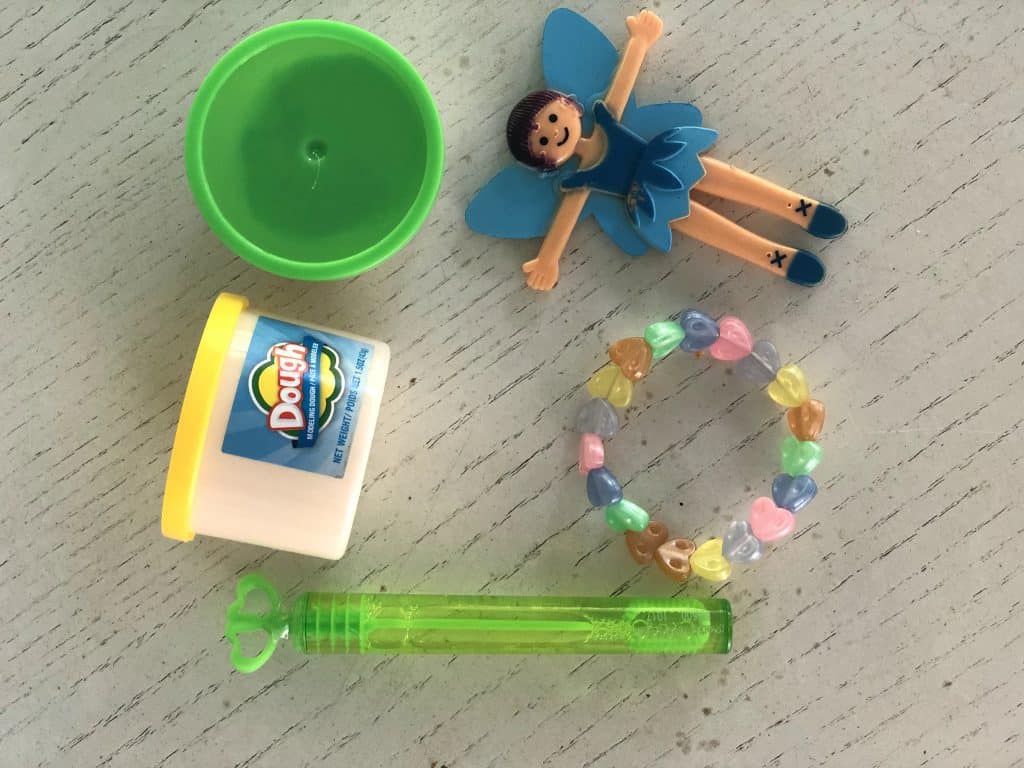 Overall we were so pleased with how Harper’s 4th Birthday Party turned out, and it was so wonderful having her friends all in one place celebrating the birthday girl. We focused on what mattered, and we had so much fun doing it! Can’t wait to see what she comes up with next year!

Do you find joy in your children’s birthday parties? Or is it a source of stress for you? 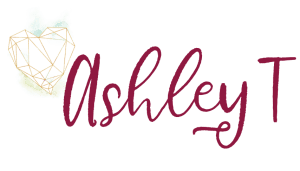 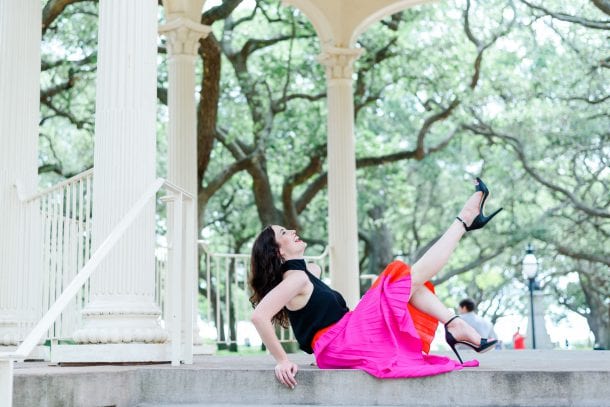